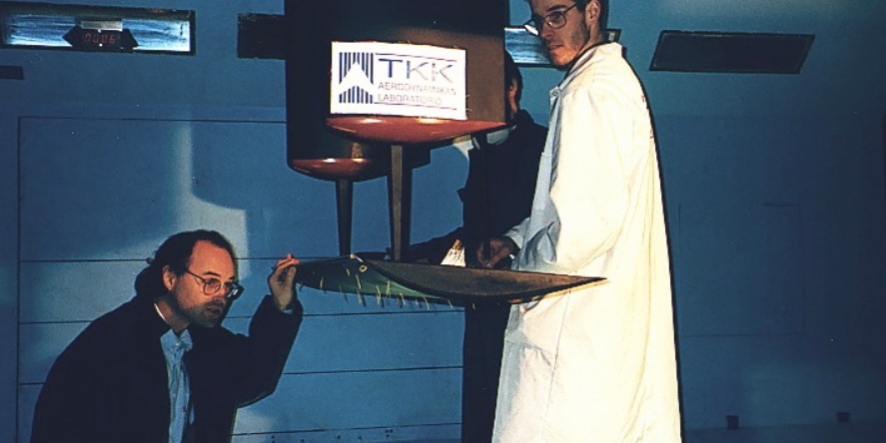 We were asked about research on an old web site of ours… there’s material that could be of interest still today. This is from wind tunnel tests we did some 25 years ago.

The testing was done in the in the Helsinki University of Technology lowspeed wind tunnel. The tests were performed to verify computer predictions of the aerodynamics of a thin, sail like airfoil, as well as to study separation bubbles behind the mast and evaluate the effect of mast shape on the performance of the sail.

Below: The carbon fiber “wing sail” in the windtunnel. The force measuring unit is in the roof of the tunnel, hence the sail is horizontal. The sail wing was fitted with different mast profiles at the front, to measure their performance. At the time, we were designing the first Finn carbon masts, and it was unclear if we wanted to make the smallest mast permitted by the rule, or the largest. The results from the testing was conclusive: You want to use the largest allowed section.

The second photo is a close-up from a smoke visualization test: With the camera flash on, the turbulent nature of the flow is perfectly revealed. To the bare eye, the smoke appears as a fuzzy, continuous white flow, you cannot distinguish the turbulence at all. The red streaks towards the front part of the sail are “reversed flow flaps”, an idea to capture the flow inside the separation bubble behind the mast, and reduce the drag. While they did work to some extent in the 2-dimensional model in the wind tunnel, they did not perform as well on a real sail.

Below: Sketches of the mast profiles tested with the carbon fiber wing. The largest, wing mast like NACA-profile performed the best. The reason is simple, it adds to the “sail area”, but its contribution is much more than the added area would suggest.

Computer enhanced images from smoke tests on a sailprofile in the Helsinki University of Technology lowspeed wind tunnel. The clips are have been captured from video and enhanced in Photoshop to visualize the flow in detail.

Above: Sail at stall. Sail with NACA shaped small wing mast at an angle of attack well beyond stall (alfa = 27°). On the video, you can see how a large vortex is shed intermittently from the luff and the leech. In this still picture, the “starting vortex” at the leach is clearly visible. This vortex attempts to suck the air on the leeward side from the luff towards the leech, to satisfy the Kutta condition and maintain an attached flow on the leeward side – in vain, because the angle of attack is too large. This 2-dimensional profile stalled at an angle of attack between 14°-15°.

Below: Luff separation bubble behind the mast on leeward side. The red yarn tuft at 5% of chord length is clearly showing the reversed flow inside the separation bubble. The flow reattaches at 8-9% of the chord as witnessed by the other tuft. Inside the bubble, the thinned-out smoke is almost inert or slowly creeping forward against the flow. The angle of attack of the sail is close to ideal.

Below: Trailing edge separation. The flow is separating at about 75% of the chord length. The flow separation on a thin, sail-like aerofoil appears to start approximately simultaneously at the luff and the leech. The disturbance caused by the leeward side separation bubble at the luff (“leeward telltails flying”) is strong enough to trigger the flow separation at the leech. As angle of attack is increased, separation progresses from both ends towards the middle, but at a much higher rate from the leech. Just before stall, the flow luff flow reattaches behind the separation bubble at 18%, and then reseparates at 60%.

In these tests, the luff separation bubble on the leeward side never reached more than 20% of the chord. Thus there was no evidence of the very long separation bubble (up to 70-80%) typical on certain thin-nosed, but thick airfoil profiles (“the thin airfoil stall”) . Alfa = 12°.

The tests were done with a 2-dimensional, carbon fibre profile equipped with pressure taps on both sides. The max camber of the profile is 12,5 % at 45% from the luff. The length of the mast is 2% of the chord. The tests were performed mostly at a flow speed of 25 m/s, corresponding to a 10 kn breeze in full scale (for a Finn sail). Flow speeds ranging from 10 to 40 m/s were tried, and it was found that Reynolds Number had no influence on the aerodynamic characteristics of the thin, sail-like airfoil.