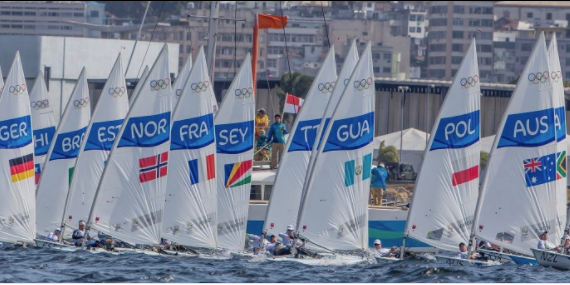 Six of the current eight Olympic classes are “single manufacturer one-designs”, in practice monopolies of their rightsholders. Only two classes, the Finn and the 470 are measurement controlled one-designs, open for anyone to build and sell, as long as they comply with the rules.

One-design classes can be divided into two categories, often abbreviated as:

SMOD or single manufacturer one-design. All boats and their parts (masts, sails, foils) are produced by the same manufacturer, maybe in several plants but still controlled by the one manufacturer. Examples of SMOD would be the Laser or RS-X sailboard.

MCOD or measurement controlled one-design. This is the traditional one-design way, where anyone can build boats and their parts, as long as they comply with the strict one-design class rules, controlled by class nominated measurers. Examples of MCOD would be most Olympic classes of the past, like Dragon, Soling or Star. As mentioned above, nowadays the only Olympic MCODs are the Finn and the 470.

Lasers at the Rio Olympics 2016. The quality of the sails is unacceptable.

Let’s look at the Laser as an example of the SMOD. One argument often given in favour of single manufacturer one-designs is that as all have exactly the same equipment, the best sailor wins, by virtue of his sailing skills, not by superior (expensive) gear. And with single manufacturing processes, you have the advantage of economies of scale: The boat, mast, sails all become cheaper when mass-produced, for the benefit of the sailor.

Well, when produced in bulk, sails or masts are never exactly the same: That’s why Olympic level Laser sailors buy five or ten at the time, pick the best one for racing, and use the rest for practice or pass them over for club level racing. At major regattas, the equipment is supplied: The sailor has no control of the quality of the equipment he is receiving. In RS-X, there have been quality problems with the supplied fins, even at Olympic level. There has been shortage in availability of equipment up to a point, where sailors have been queuing for parts at major events.

One can argue that the Laser-style “standard equipment” is not the best way to go, fair to all sailors, nor does it ensure that “the best sailor wins”. To win in Laser, you need to be the right size. Sailing is inevitably an equipment sport. The sailor should be allowed to tailor his equipment according to his size, weight and morphology. Not permitting this leads to a narrow weight/height band of competitive sailors in a given class, shutting plenty of morphology out of Olympic competition altogether.

Male sailors physique at the Aarhus Worlds 2018. The size band of the Laser sailors (yellow dots) is much narrower that that of the Finn (grey dots). With the Finn excluded from Olympics, there is no class for sailors above 85 kg.

The “standard equipment” approach is not the one adopted by other Olympic sports: Imagine if cyclists all would have to race with a one size/standard bicycle, or downhill skiers with the same pair/stiffness/length of skis, or pole vaulters with the same height and stiffness pole? Or all athletes would have to wear size 8 running shoes? Other water sports, like rowing and canoeing, have adopted class rules controlled one-design, not a single manufacturer approach, why should sailing then?

Recently, the carbon-sole Nike Vaporfly running shoe was approved by the World Athletics – after it had already scored several new world records. No monopolies in Athletics, either.

Imagine if downhill skiers all would have to race with the same pair/stiffness/length of skis, notwithstanding their size and weight. Pictured Lindsey Vonn.

The standard equipment approach is discriminatory. If you take the Laser, you pretty much need to be 180-185 cm and weigh 80-85 kg, or else you really don’t have a chance. If you were allowed to tailor your sail (and/or mast) to your weight and height, you could race competitively even if you are not in the ideal measures by birth. Many more sailors can compete in a class when they can pick equipment suitable for their size.

Sailors queuing for parts at the Aarhus Worlds 2018. RS-X is a monopoly of Neil Pryde, based in Hong Kong. Due to the limited supply, sailors have to order parts months in advance and have national quotas about how many fins or booms they can buy at a time. Small nations have tiny quotas.

FRAND stands for Fair-Reasonable-Non-Discriminatory. It is World Sailing’s new antitrust/monopoly policy, intimately connected to the SMOD-MCOD discussion. All classes wishing to participate in the Olympics have signed a FRAND-contract with World Sailing. Although we don’t know about the exact content of the contract, we have been let to understand that it should open the manufacturing of all Olympic classes. “To address the antitrust issues, World Sailing has modified its procedures for selecting Olympic equipment and also adopted a new policy that requires all Olympic classes to put in place procedures that would enable any interested and qualified party to become an “approved builder” for that class and to have access to markets with no territorial restrictions.”

Recently, ILCA (International Laser Class Association) approved Devoti Sailing as a licensed builder of the ILCA (Laser) class boats, a first along the FRAND lines to our knowledge. WB-Sails has applied for a sailmaking license which we eagerly are waiting for.

In a follow-up (part 2), we will look closely at the sail manufacturing process. We examine reasons why the measurement controlled process, rather than the single manufacturer, is fairer for the sailor, less discriminating and better value for the money. After all, when has a monopoly led to a cheaper, better quality product for the consumer?